My Training In Italy And With Dr. Kleinert

I am Fabio Curini-Galletti, an Italian and European Certified Hand Surgeon Specialist and International Member of ASSH and AAHS.

My story: after graduating in medicine (1978 University of Pisa, Italy, 6 years) I did a six-month internship in the Department of Orthopedics of Grosseto (a small town in Tuscany, Italy); later I joined the staff.

In 1982 I became a specialist in Orthopedic Surgery (University of Siena, Italy, 3 years) and in 1985 I also specialized in Hand Surgery (University of Florence, Italy,3 years). In 1986 I went to Louisville to learn from Harold Kleinert and his staff. I stayed in the Jewish hospital as a Visitor only for a month, but this was very intensive and important for my professional life. I returned back to work as a hand surgeon in my hospital in Italy and I really had many hands to operate on. In 1987 I went to Srasbourgh to learn from Foucher. In 1989 I went to Grand Rapids (Swanson) and to Philadelphia (Hunter). In 1993 I went to Salt Lake City to learn Congenital from Lister. This is my training.

After these experiences, I could work as a fully trained hand surgeon with many patients. In 1997 I went to work in the Department of Surgery and Microsurgery in Pisa (Italy); now I work in Rome in Private Practice. I continue to improve. For example, I was a Visitor in Mayo Clinic in Minnesota (Rizzo, 2010) and with Courses on Cadavers in Chicago. I also had the responsibility of taking classes in Singapore (2016) and Phoenix (2018). My training experience has been very busy and with many moves.

If I could go back in time, after graduating I would immediately take the test to have the Italian degree also valid in the United States. If I had done these tests, after the month in Louisville, when Dr. Wolff asked me to stay as Resident or Fellow, I could have accepted. When I returned to Italy in 1986, I started working so hard in my hospital as Hand Surgeon that it was not possible for me to perform the test. For my training, I would have liked to have spent more time in Louisville because in 1986 the Department of Hand of Jewish Hospital was an extraordinary place to learn. 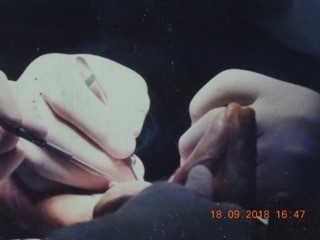 A photograph I took of Dr. Kleinert with scalpel in 1986 in Louisville